April 18, 2018
How do you create armour from a fictional Monster whilst retaining its identity?

(NOTE: This is a sister post to creating the Monster Hunter fan creature: 'The Donkestra'.
Donkestra Blog Post)

This was the main question I had had in my mind throughout the entire process of creating the Donkestras Armour. So first I will show you what I ended up with, and how I came to this result:

These armours are what I felt came to feel, both individual against the collection of armours Monster Hunter sports, and individual to the base Monster, the Donkestra (seen below).
So to begin with, I have to identify what elements of this creature are particularly iconic to it. What makes this armour recognizable as identifiable as Donkestra hide. and I came up with this: 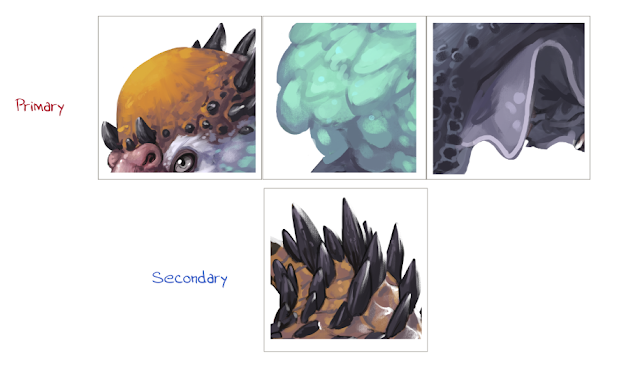 The Donkestras most discernable traits were its large round head, its bright feathers, and its pale skin flaps. With its secondary traits being the dark spines that covered its body.

Knowing these traits, I began working on the male armour and attempted to create a variety of armours that could be considered to take note from those motifs.

(I began with the male armour in particular because I had wanted to create a solid piece of armour first, and one trait within Monster Hunter designs is how the female armour tends to take a more 'relaxed' approach to believeability as armour and tends to show more skin.)

Below are the first three sketches I came up with. They are all inspired by different aspects of real life armour, from the medieval plate armour to the Mongolian leather armour.


I had begun from a place of realism because I wanted to start off with a solid base that I could then expand from. In the designs you can see how each aspect of the Donkestras traits goes on to inform and inspire or enhance the base idea of the armour.

I was actually pretty happy with the middle armour as I felt it more closely resembled the Donkestra itself. However the weight of the armour didn't have the same feel of this rather thick and feathery creature. So decided to push on with some more armour concepts. This time pushing a bit harder into the fanastical realms.

What I had noticed within Monster hunter was a distinct lack of more shroud or cloth based armours. And so I wanted to try and bring in more middle-eastern or bedouin influences on this design:
Each of these designs was created around the idea of being primarily cloth, but in order to try and create visually distinct variations on this armour the other traits would be used to either enhance the shape language (as is the case with the circular shield), or create some distinct silhouette (like with the feather top).

The same issue remains however as was present with the initial designs. these did't have the right weight to them. Some aspects definitely felt right, but the majority didn't fit well, in my opinion. This time I would attempt to create much thicker armour in an attempt to remedy this.
These designs felt much closer to what I was aiming for. A bit over the top, easily recognizable, and distinguishable as the Donkestra. The left hand side sketch is likely the weakest due to it not really using many of these traits effectively to portray the Donkestra. But the middle certainly gets about as close as I could have hoped for a set of armour to resemble a strangely shaped bird/mammal.

In fact looking at Frogmouth helmets in particular I felt they had the exact right kind of curvature to their head shape to represent the Donkestras rounded silhouette and feel.

With that I finally had the base armour I wanted. It was now time to begin working on the female armour. But in the effort of both creating a fleshed out series of designs, and to check that a female variation of another armour might not open up better possibilities with a design I had previously written off, I made sure to do a female variation of every male armour sketch so far.

Now as I mentioned earlier. Female armour in Monster Hunter has a tendency to be a bit.... well, flattering? With all of my original armours for the men I now just had to take these designs, make them a bit skimpier but retain the general aesthetic, and see if they fit together.

Here's what I came up with:


Even after doing all of these different variations, I was pretty comfortable with what I had chosen. The thicker Frogmouth design would be the pair I would use from this point on.

Now the armour had a lot of unanswered questions such as: 'How long do I want the womans skirt to be?', as well as what kind of colour would the armour sport.

Luckily, the majority of the colour scheme had been chosen purely through the Donkestras armour. But some differing hues, saturations and combinations as well as some design tweaks had to be worked out. Creating these slightly more refined sketches:
By now I had chosen my final design, but I needed to create a breakdown for any future 3D modeller that hoped to understand how this armour was put together. that meant an orthographic, as well as some undercloth studies.
With this penultimate step done it was just time to begin rendering and creating a clean variation of both sets of armour to accompany the rendered copy of the Donkestra.

Below are the final sheets and how they match up with the Monster itself:
And with that the final Armours are complete. I think they very accurately represent the Donkestra as a design and stand alone as their own sets of armour as well.

Popular posts from this blog

April 18, 2018
I decided it had been a while since I created a 'Monster Hunter' creature, and an accompanying armour set. And with Monster Hunter: Worlds recent release and success, I figured now would be a good time to begin work on a creature design I had had in my head for a while.

(For this blog post I will be focusing entirely on the Donkestra creature design. If you'd like to see how the armour was made you can find the joint blog post here:Donkestra Armour Blog)

So before we begin, let's start at the end. Here is the final design:
The Donkestra is a gliding reptile with heavy influences from mammals and birds. It uses skin flaps to glide across the land, whilst its spines and reinforced skull help defend it from predators and hunt down prey. Its hooked tail allows it to both hang upside down as it rests, and to quickly adjust its course mid-flight

But originally I had not inteded the creature to work in this manner at all. I had begun work on this thinking that I wanted to…
1 comment
Read more

August 12, 2015
I knew environment design was one of my weaker areas. And so I signed up for Nathan Fowkes Environment Design class. His lesson threw you in the deep end of work pretty fast, which I actually really enjoyed. And so this post is just about the first lesson of the class. To take 10-12 images we like, and study and replicate them, within a short period of time.

Luckily I have a very large collection of images on my (Pinterest board, and so finding some images I liked proved quite easy. And so here are the 12 images I made for this assignment:


These were actually really fun, and I'm hoping to do more soon!
Post a Comment
Read more

So this is the last few weeks of the Schoolism course combined into one. Our first task was to study elephants, both Indian and African, so we could learn the subtle differences in their anatomy (there's more thasn just their ears you know :P)Here's what I created with the appropriate notes:


It was really interesting to do, as I certainly underestimated the number of anatomical differences myself before starting this.

Next we had to take another animal and combine it with any of the previous studies thus far. I chose to take these elephants, and combine them with a Moose. Creating a Mooslephant!


And finally we had to create an illustration using this creature.

I chose to try and tell the story of characters from Magic: the gathering. Specifically a group of Kor as they tried to tame this wild beast.

If you've seen my development process before you should be familiar with the steps I've taken to make this illustration:

Other Places You Can Find me